When making sushi or sashimi, we all know that a regular knife just won’t do the trick. For this reason, specialized knives that are made for sushi and sashimi were invented. These knives are long and thin and allow you to slice strips of fish, which are what’s required to make these Japanese dishes.

Searching for the best sushi knife is a bit daunting, even with the different options that you have on the market. There are literally hundreds of different knives that you can use for sushi or sashimi, so it is a bit difficult to make a choice. For that, we’ve got you covered.

Among the different brands, the Kai Wasabi Black Yanagiba Knife is one of the most sought-after choices. Let’s have a look at this amazing Japanese-style slicing knife and what it can offer.

Let’s check out some of its amazing features.

The Kai Wasabi Black Yanagiba Knife features the traditional blade styling of Japan. The blade is sharpened on one side, and the other side features a flat surface. The Japanese are known to use single-bevel knives because its main advantage is its sharpness, and this is what you’ll get to enjoy with this knife.

This knife is extremely sharp because you only need to hone one side. It has a sharper angle, allowing you to perform precision slicing and cutting. The flat surface, on the other hand, prevents the food from sticking to the knife.

This knife also allows you to make long and unbroken cuts when slicing vegetables or fish, which is very hard to achieve when using a regular or a double-bevel knife.

The core of the blade is actually made from Daido 1K6 high-carbon stainless steel that can provide amazing edge retention compared with other steels. This would allow you to use the knife for a long period without the need to hone it. Thanks to this feature, it will stay sharp for a long time.

To make it look elegant, the blade is bead-blasted to provide a smooth finish to the knife. There are Japanese characters for “wasabi” embellished on the knife as well.

As a result, this knife looks very professional and stylish at the same time. The Japanese characters made the knife more appealing despite its simple design.

The handle looks modern, and it is very durable at the same time. It is also infused with an antibacterial agent to make sure that germs and bacteria won’t reach the food while you are using the knife.

The Kai Wasabi Black Yanagiba Knife is not as thick as regular knives, but they are on par when it comes to durability. This knife is known for its durability and resilience, and it can last for a long time as long as you know how to take care of it.

As per the manufacturer, this knife is dishwasher safe. However, like with many other precious kitchen tools, it is preferable if it will be washed by hand.

All in all, this knife is extremely useful when you are preparing Japanese dishes. This is a single-bevel knife that would allow you to make precision slicing, which is the primary requirement when creating Japanese dishes like sashimi and sushi. It is very durable and the knife can be used for other cutting or chopping jobs as well.

The knife also comes in different sizes, starting from four inches all the way to nine inches long. If you need to use it for sushi or sashimi, it is better to use a longer blade. It also has a comfortable handle that won’t strain your hand even after using it for a long time.

Comparison with Another Yanagiba Knife

The Kai Wasabi Black Yanagiba Knife is definitely a perfect choice to use when preparing Japanese dishes, but if you are looking for a cheaper alternative, check out the JapanBargain S-1553 Knife. The price is almost half of the Kai Wasabi knife, but this knife is also made for Japanese food preparation. 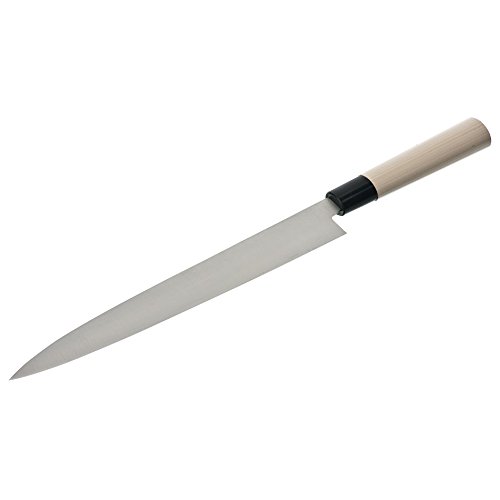 The JapanBargain S-1553 Knife has a blade length of nine and 1/8 inches, and it comes equipped with a 14-inch wooden handle. The handle provides maximum comfort, and there is also a control plastic bolster.

This is a cheaper alternative, so you cannot expect it to have the same quality as the more expensive Kai Wasabi Knife. Still, this is a great choice if you don’t have a budget for a knife. If you are only using it for regular cooking, then this is a good pick. If you have a restaurant or you plan to prepare Japanese dishes just for the fun of it, it is better to invest in the Kai Wasabi Black Yanagiba Knife.

Overall, the Kai Wasabi Black Yanagiba Knife is definitely a great pick if you are on a tight budget but want a knife that would help you create the best Japanese dishes. It has the sharpness that you need to cut meat and vegetables easily, and it is durable enough to last for a long time.